The first rumblings of legalizing recreational weed were a cause for concern to many in smaller, more rural, more conservative towns. A century’s worth of propaganda against cannabis had fed many people lies and twisted truths about the effects of the drug, on both individuals and communities. When ultimately given the choice, many small towns far from cosmopolitan cities opted to continue banning the substance, believing it to be much too dangerous.

However, rural communities are starting to see the light. As the marijuana industry grows, weed-friendly small towns are seeing an economic boom like never before, causing a reefer revolution that could fundamentally change the conservative stance on cannabis.

In 2010, Smiths Falls, Ontario was a town of fewer than 9,000 people, almost all of whom were suffering under the weight of the global recession. An old railway town, Smiths Falls’ long-held status as a hub for manufacturing and industry was starting to shatter as employer after employer pulled up stakes. Perhaps the most crushing blow was the end to the town’s Hershey’s chocolate factory, the largest in Canada, which came with a loss of over 1,500 jobs. For years after, the town steadily declined, with residents losing first their cars and then their homes, with grocery stores closing down and the population driven to more successful corners of Ontario.

Things looked bleak to Smiths Falls, until 2013 when a small cannabis company moved into that long-vacant Hershey’s factory. At the time, Tweed Marijuana Inc. was a budding business, servicing a small clientele with medical marijuana, which has been to a select group of patients across Canada since 2001. Though the company adopted the substantial space, it promised only about 150 jobs to the residents of Smiths Falls Ontario — but that changed when Justin Trudeau took office as prime minister in 2015.

Trudeau announced as part of his campaign that Canada would take steps toward fully legalizing cannabis for adult, recreational use. Thus, Tweed began taking steps to pivot its business model to produce recreational products — and its Smiths Falls factory started to grow. When Canada did enact recreational marijuana laws in 2018, Tweed was ready to supply first Ontario and then the rest of the country with high-quality cannabis goods.

In 2020, Tweed’s parent company, Canopy Growth Corp, is the largest cannabis company in the world, employing more than 3,000 people globally. Tweed was the first marijuana company to be traded publicly, and it has increased in value more than 22,139 percent since its debut. Most importantly, Tweed transformed Smiths Falls from a dying town to the pot capital of Canada, if not the world. Today, that old Hershey’s factory is now a weed lover’s destination, with a fantastic community center devoted to public outreach — giving residents of Smiths Falls and surrounds a place to gather and work and helping all Canadians better understand the economic power of pot. 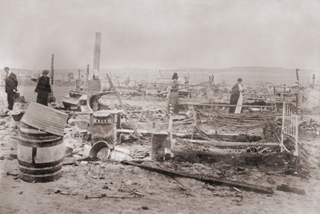 Trinidad, Colorado was founded in 1862 as a coal mining town when a rich seam of the natural resource was discovered in its surrounding hills. In just a couple years, the town swelled to over 1,000 residents, and by the end of the century, it boasted three newspapers and a semi-pro baseball team.

Unfortunately, around the turn of the 20th century, Trinidad began experiencing disaster after disaster. First, a horrific gas explosion deep in the mines killed over 30 miners; then, a fire tore threw the town’s business section; severe flooding wiped out the train station and every bridge, and dozens of labor strikes basically shut down the mines. For much of the rest of the century, the town experienced a slow, painful decline, coming ever closer to the status of ghost town.

More recently, the Great Recession was not kind to Trinidad, either. Plummeting prices of oil and natural gas reduced the state’s dependence on coal. Between 2010 and 2015, the town lost 10 percent of its population as miner and others in the coal industry packed up in pursuit of jobs. Yet, many left too soon.

Just as the coal industry was evaporating, Trinidad adopted a new industry: marijuana. As one of the first two states to pass adult-use cannabis regulations, Colorado gave each town the opportunity to choose whether it would permit marijuana use, and Trinidad eagerly accepted. It was one of the few rural towns in the Southeast corner of the state to do so — which catapulted Trinidad dispensaries into profitability. Today, the small town boasts over 16 pot shops, which service not just Coloradans but visitors from New Mexico (just 11 miles away), Texas and Oklahoma as well as tourists from farther afield. The income generated from these dispensaries has allowed the town to replace its century-old water pipes, brick streets and fire engines.

Whether growing and manufacturing, as is the case for Smiths Falls, or merely selling, as dispensaries do in Trinidad, the cannabis industry has a lot to offer small towns. The sooner rural communities learn about the benefits of cannabis and reject old, outdated propaganda surrounding the drug, the sooner they can leverage the plant’s power to thrive.

Nanotechnolgy being used in Cov Vaccine

The World’s Most Impressive Cruise Ships

Why Rural Towns Are Happy to Invest in Weed

Guide to choosing an online casino and playing safely

Healthcare digital transformation: what to look for in 2021

3 Steps to Take Before and After Changing WordPress Themes

Why do you need to use IGTV to kick start your...

Guide to choosing an online casino and playing safely

5 celebrities who are fans of gambling and betting

The World’s Most Impressive Cruise Ships

ABOUT US
TechsAcademy is your news, entertainment, music & fashion website. We provide you with the latest news and videos straight from the entertainment industry.
Contact us: info@techsacademy.com
FOLLOW US
© TechsAcademy - All rights reserved